All about Aogami, highly ranked material for kitchen knives (1)

We are going to share with you about “Blue Paper Steel”, the highly ranked material for cutlery steel known as “Aoko” or “Aogami” in Japanese.

“Aogami” is an alloy steel made of Shirogami (or called “White Paper Steel”, a carbon steel with low content of impurities), mixed with tungsten and chromium, which means Aogami is a steel made by the hands of human. Among others, what matters the most is how sharp a knife edge can be and how long its sharpness can last. Plus, if it doesn’t take much to sharpen the edge, that’s fantastic. Some says that Aogami was used for an aim to achieve these features, while the material was originally developed for an edge of plane for shaving a wood pillar in Japan.

The Blue Paper Steel has a high level of stickiness and abrasion resistance thanks to chromium and tungsten, so it can keep you from worrying about chipping-off and wearing-out of a blade to some extent compared to White Steel. Since the Blue Paper Steel contains a certain level of carbon, rusting and chipping are inevitable. We can’t tell the difference between A and B just by looking at them but we can by using and sharpening them. Also, the level of hardness varies depending on quenching and tempering temperature. Plus, depending on the skills of a blacksmith, A’s level of hardness can be as the same as B’s. 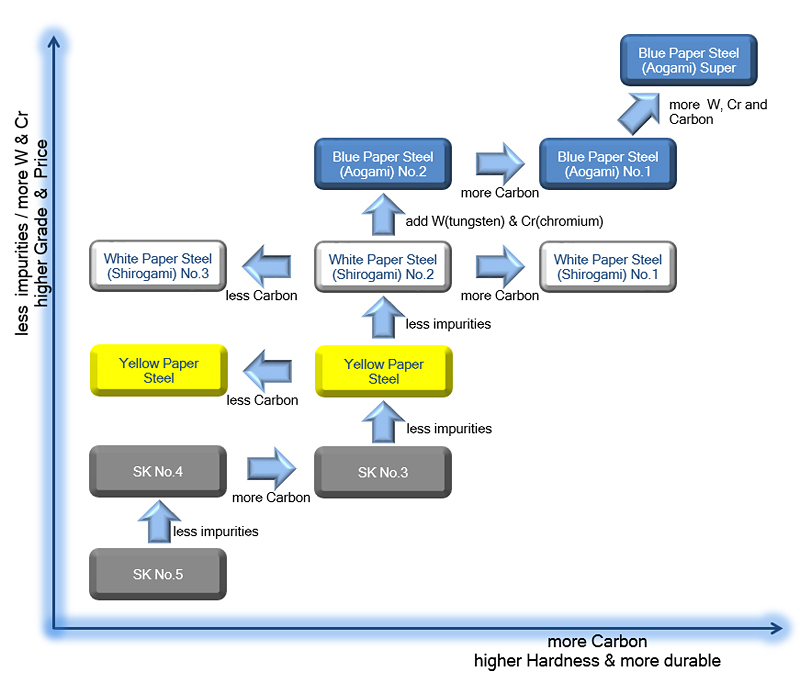 It must be noted that “Aogami Super (Blue Paper Super)” is NOT necessarily the best in the 5 types of Aogami, sometimes the worst contrary to the hardness and price unfortunately.

We’ll explain the details about Aogami No.1 in the following chapters, that will be posted in series soon.
Keep your eyes on it!