The Daimonji Bonfire, or Daimonji Gozan Okuribi, is a traditional event and was held on the evening of August 16th in Kyoto JAPAN.
Large Chinese characters and other motifs are drawn by fires on the slopes of the mountains surrounding the Kyoto Basin in the evening.
It is a famous for evoking the image of a Kyoto summer.

The origins of the festival are obscure, but it is believed to be ancient, Heian era(8-12 century) or Muromachi era(14-16 century).
Some historical sources can be found written in Edo era(17-19 century),
it is said that the tradition originated when the monk Kobo-Daishi, praying for an end to plague, lit up the character representing ‘large’ in flame,
and that it was said held for “Urabone”, Buddhist festival called the “Bon” Festival for praying for our ancestors at the middle of August. 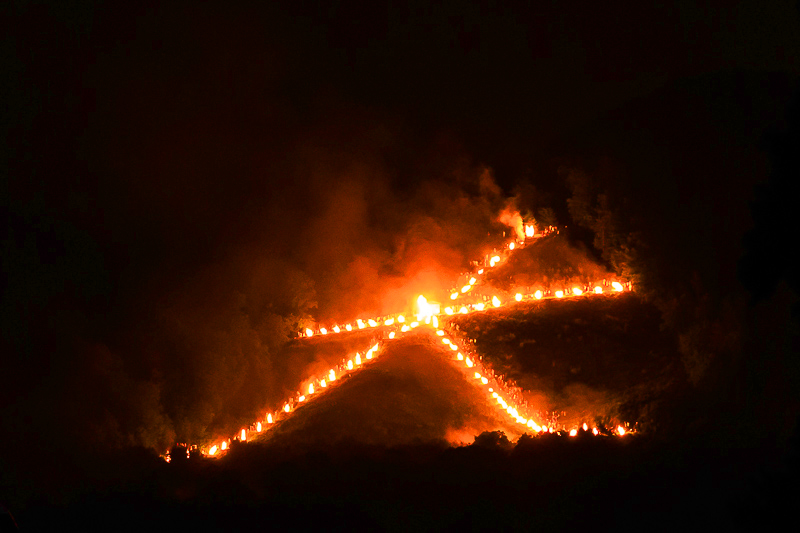 The character of “dai” (or “large”) is lit on the Nyoigatake peak,
and those of “myo” and “ho” are seen on Matsugasaki Nishiyama and Higashiyama mountains, which make up the word “Myo-ho” (wondrous teaching of Buddha). 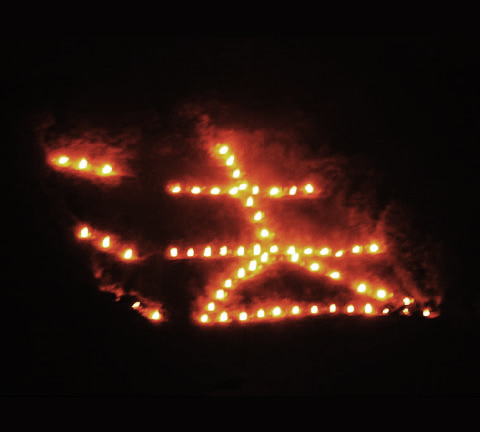 Another “dai” called near Kinkakuji temple is simultaneously set, that is called “hidari daimonji” because it is located on the left side of Kyoto.
In addition, a ship-like funagata is set on the Nishigamo Funeyama, and a toriigata motif (like the gate erected at the entrance of a shrine) on Mt. Manadarayama in Saga.
These fires are collectively called “Daimonji Gozan Okuribi.”

It is just an introduction of Japanese culture and traditional event.