Takohiki v.s. Yanagiba, Which is suitable for Sushi and Sashimi?

A customer gave us a good question about Sushi/Sashimi knives.

“I’m looking for a sushi knife, can’t decide which I should select, Takohiki or Yanagiba.
The takohiki just look cool, functionally wise they should be the same but which would be better for sushi related tasks, mainly sashimi and nigiri?”

It is a kind of basic question but very essential.
The following was our answer, hoping it would be helpful for him.
———-
“As you know, Yanagiba and Takohiki are both kitchen knives suitable for Sushi and Sashimi, although Yanagiba is nowadays more and more popular than Takohiki.
You may find out what the difference is between them if you read the following,

<< Yanagiba >>
A Sashimi Knife, for cutting and filleting fish or ham with a pull stroke. 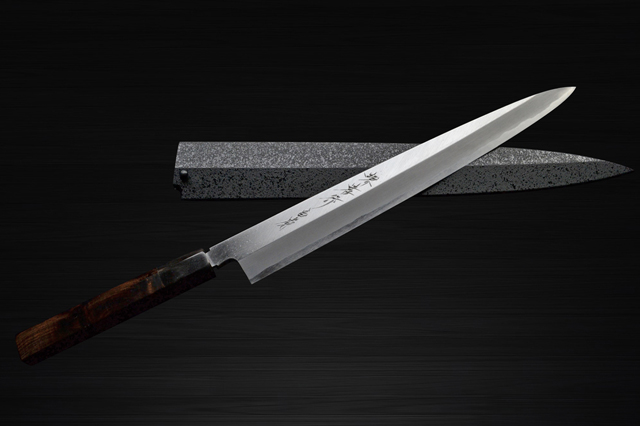 Slim blade in the shape of a willow leaf or Katana (sword). Long and Narrower blade is suitable for slicing tasks.
Especially for preparing fresh, good&beautiful shape of raw fishes (sashimi). The Yanagiba is called “Shobu” and popular in Western Japan (around Osaka and Kyoto). 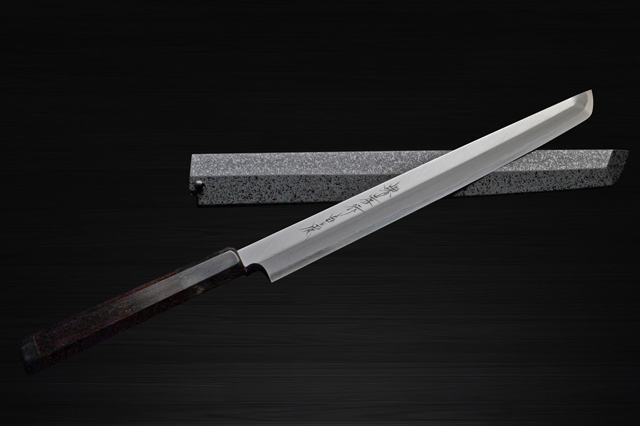 Not for slicing “Tako” (Octopus) but for making Sashimi. The edge line is almost straight, while Yanagiba knife’s blade edge line is more curved towards the blade tip.
The Takohiki was popular in Eastern Japan (around Tokyo).

<< Fuguhiki >>
This time, we should explain “Fuguhiki” as well, in addition to Yanagiba and Takohiki.
Fuguhiki is a Sashimi knife for a specific purpose, originally designed for cutting and slicing Tessa (Blowfish Sashimi).
Its blade shape is similar to Yanagiba, but is narrower and thinner than that of Yanagiba. That is suitable design for thinner cutting, slicing tasks for higher-level professional chefs.
———-

You can check a detailed list for the three sashimi knives.
Yanagiba, Takohiki, Fuguhiki