Posted on : December 5, 2014 Last updated : July 21, 2015 Author : IMPORT JAPAN.COM, INC. Hocho-Knife Sales Team Category : Knife Sharpening
In general, it may often be understood that more acute angle provides a better sharpness.
Do you think it is really true?There is thought a misunderstanding.
Angle of the cutting edge (at the edge point) does not affect the ability to cut things. 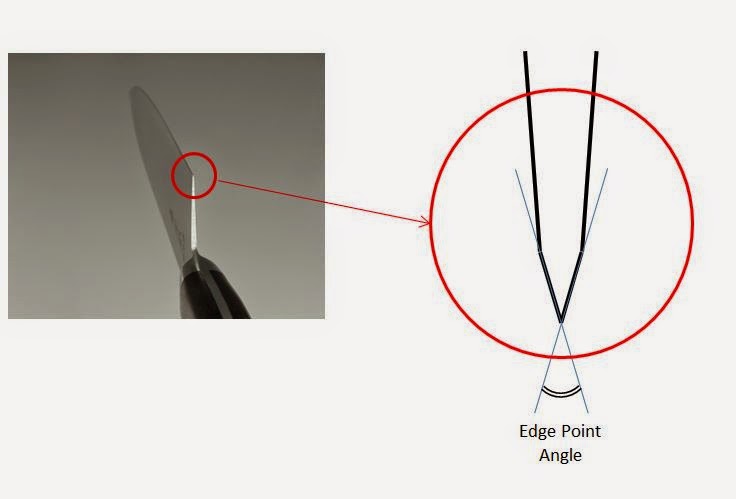 To think about cutting a thin material, both an obtuse and sharp kitchen knife do not make a significant difference in the sharpness because there is almost no distance that the knife go interrupts.
That’s why the edge point of professional sashimi knives is often sharpened at about 35~45 degrees(!) , but the sharpness is excellent with less-likely chipping.

(General household all-purpose kitchen knives have sometimes been sharpened at about 25~30 degrees.)
For less resistance when the knife goes interrupt the cuttings, you may only feel that sharpness is good if you use an very acute-angle blade.
It is the fact that smaller angle provides better sharpness feeling because of less frictional resistance.
However, the smaller angle at the cutting edge would cause easily chipping when you try too hard to cut a hard thing (such as pumpkin and frozen foods).

FYI, for double-edged Western style kitchen knives, about 25~35 degrees is often relatively said good from a view of the balance between sharpness and less-likely chipping.

Next time, we’d introduce a continued article of why the Sashimi knives have good sharpness despite such a not-so-acute edge point angle.